Thanks to Birdemic Director James Nguyen, You Can Still Get Digital Storybooks Free! 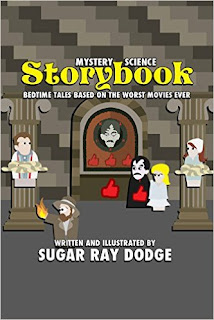 Hey everypeoples! Well, the awareness building campaign is over, but your opportunity to download Mystery Science Storybook and Night of the Living Storybook is NOT, and won't be for a long time!

As many of you know, I was threatened with a ten million dollar lawsuit by Birdemic director James Nguyen, and he then issued frivolous DMCA takedown notices to Amazon, Blurb and Gumroad, and will most likely continue to follow me around the internet and throw these erroneous notices at any website I attempt to sell my work on because I refuse to remove a parody of Birdemic from the book.

Because of this, I have decided to indefinitely leave both books up in their entirety on Archive.org for anybody to download completely free. You can also read individual chapters free on this website (list below.)

The only thing I ask is that you consider becoming a patron to help fund completely new chapters from here on out. Art takes time and money in order for it to reach it's full potential, and right now I have a Patreon campaign set up to help me get some income so I can focus completely on the series and bringing you new funny. If you can't donate, that's totally fine, all I ask is that you consider it. Even a $1 a month donation would make a huge difference. Thanks so much for your consideration and enjoy!


Support the Storybook series on Patreon!
Posted by SRD at 11:38 AM