James Nguyen is attempting to get Mystery Science Storybook removed from both Amazon and Blurb! But you can still download BOTH volumes FOR FREE AT ARCHIVE.ORG! Please consider making a Paypal donation (sidebar) or becoming a Patreon donor to help compensate with the loss of business I am about to receive because of Nguyen's actions.

On August 17, 2016, as part of an awareness raising campaign for my Mystery Science Storybook series, I published a post that featured my parody of Birdemic: Shock and Terror entitled “Attack of the Birds,” which is the third chapter of the first volume of the series. Like all Mystery Science Storybook stories, “Attack of the Birds” is a loving parody of it's source material, and the word parody is featured prominently in the story's subtitle, and a work of parody constitutes Fair Use of it's respective source material.

I would also like to point out that all drawings and dialogue were created from scratch by me, and I and I alone can claim sole intellectual property of every single element of every single page in Mystery Science Storybook. 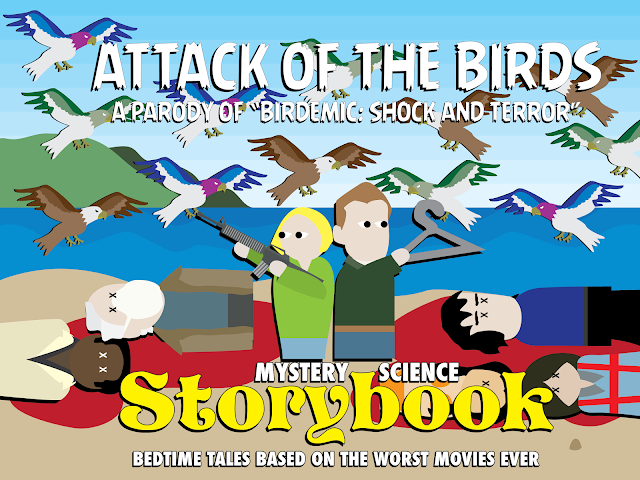 Later that day, I received two emails from Mr. Ngyuen, one sent to me on Facebook and another sent to me to my personal email account. 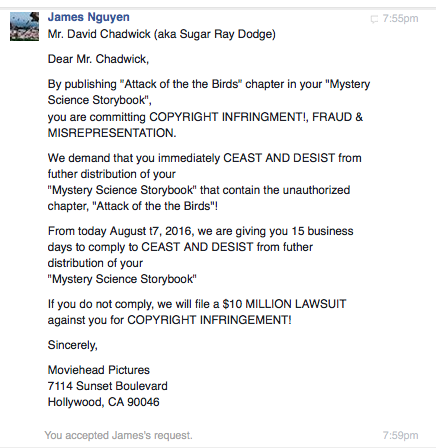 Two more emails were later sent to me, the first being a copy of these emails, but with several members of the Birdemic cast and Severin Films employees CC'd. The other was this, a forwarded message to me that he has placed a copyright infringement claim on the Kindle edition of Mystery Science Storybookwith Amazon. 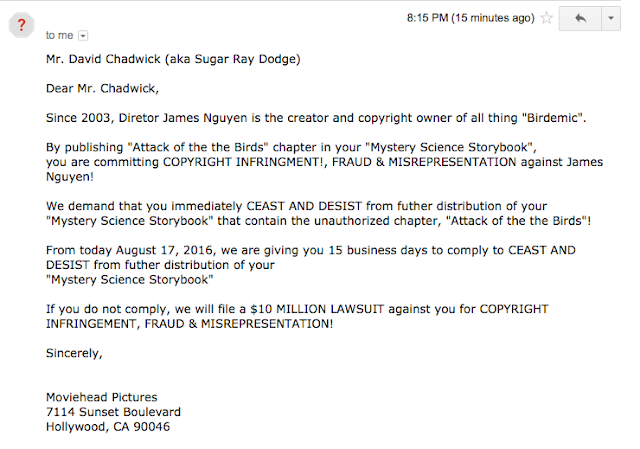 I responded with this email, and he responded again. 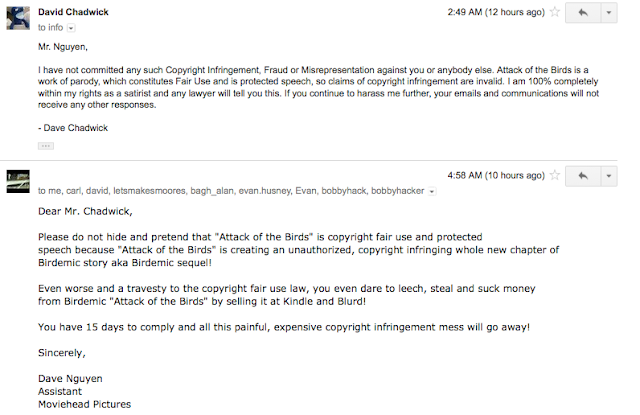 I did not respond. Earlier today he forwarded me confirmation that Amazon was in the process of removing Mystery Science Storybook based on his ignorant claims!

It is clear that Mr. Nguyen has declared war on Mystery Science Storybook and does not have an operational understanding of the concept of parody and Fair Use. I will appeal Amazon's decision and will most likely win such an appeal. I have worked too hard on this series and will not let James Ngyuen's ignorant bully tactics push it out of existence. You can still download BOTH volumes FOR FREE AT ARCHIVE.ORG! Please consider making a Paypal donation (sidebar) or becoming a Patreon donor to help compensate with loss of revenue I am about to take, and share this post on your social media feeds to spread the word about this injustice.

Dude is not only an incompetent filmmaker and an idiot but a bully and a douche as well. Stay strong and fight this human stain.

The way that asshole (Nguyen) talks, you think his "movie" was entirely original concept and content...

But he uses CAPITALS which makes it REALLY SERIOUS. On the other hand, isn't Birdemic a parody to begin with?

Dave, I unfortunately have a LOT of experience with this stuff (however I am no attorney, but I have paid for my share of them) and I can tell you that you are in the right. This is parody of a publicly distributed product - fair game and you have not used any existing copyrighted materials. BTW Great Job on "CHASING TIME". Very funny! Be well. -David Giancola

This is why the EFF exists. Contact them and remember to support them.

Is it even possible to "ceast"?

Not really. The sequel, maybe.

"Ceast"? Did spellcheck not tell him the word is "cease," not "ceast"?

First, find out what "ceast" means and maybe do that. Maybe it's something nice.

I love that his lawsuit threat contains an absurd round number. TEN MILLION DOLLARS,

Nguyen should be commended for being able to type so well with his head that far up his own ass.