What RiffTrax Means To Me: An Essay by Sugar Ray Dodge 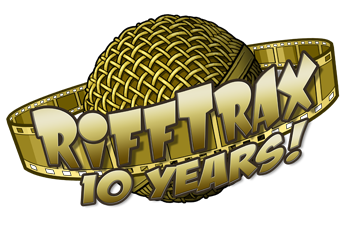 This month marks the 10th anniversary of RiffTrax, the reincarnation of Mystery Science Theater 3000, which, in my opinion, has surpassed it's predecessor in creative accomplishment. It features Michael J. Nelson, the second host of MST3K and star of the 1996 film of the same name, Kevin Murphy, the second and most iconic Tom Servo, and Bill Corbett, the second and more versatile Crow T. Robot. RiffTrax's first release was Mike's solo riff of the 1989 kick-fest, Road House, on July 21st, 2006. 10 years later, they have a catalog of over 200 riffs by the main team, as well as dozens more from their RiffTrax Presents teams, featuring Matthew J. Elliott, Ian Potter, Janet Varney, Cole Stratton, Bridget Nelson, Mary Jo Pehl and others.


Before I delve into why RiffTrax is so important to me and my life, I suppose I better give some back story as to how I came to be aware of Mystery Science Theater 3000 and, later, RiffTrax itself. Back in high school, my older sister worked at Blockbuster Video and she brought home a copy of Mystery Science Theater 3000: The Movie, where Mike and the bots took on the film This Island Earth. From that point on, I was hooked. I was amazed that something like this could even exist, and I knew I wanted to be a part of it. I started watching it on the SciFi Channel, by which point Mike, Kevin and Bill were the starring lineup, and that became the version of the show I became most familiar with and fond of. I have very distinct memories of seeing Riding With Death, Time Chasers, Jack Frost, Space Mutiny, The Deadly Bees, The Final Sacrifice, Overdrawn at the Memory Bank, and The Pumaman all for the first time during those years, and I still can't see any of those episodes without being transported back to the late 90s, watching them after track meets on a Saturday afternoon.

Upon my graduation from high school, MST3K was cancelled, and it seemed almost fitting that this awesome thing during that part of my life to end along with it. I joined the Army, went away, but I always thought about MST3K when I would see bad movies and think “this would be a PERFECT episode!” I was reintroduced to the series during my second deployment to Operation Iraqi Freedom in late 2005, when a friend of mine let me borrow some DVDs he had bought, and I became a fanatic all over again. It's amazing what you forget over the course of 6 years. I bought more than a few DVDs in 2005 and 2006, and I even heard that Mike Nelson had formed RiffTrax, but given the nature of that project and where I was at the time, I ended up not checking it out until much, much later.

Much, much later took the form of the Christmas break in 2008. By this time, RiffTrax had already been around for a couple of years and had a well-defined library of blockbuster movie commentaries ready for my to dive into. It was my second-to-last Christmas in the Army, and I had spent several months that year traveling all over the country, so I decided not to go anywhere. I was all alone and bored out of my mind. I decided to finally check out RiffTrax, wondering what had been preventing me from doing so. I bought and downloaded their riff of The Dark Knight, and once again, I was an immediate fanatic. I spent my final year in the Army catching up on all the essentials I had missed, as well as all the new releases as they came out.

In early 2010, I received an Honorable Discharge after ten years of service and went back home to Utah. My reintroduction into regular society that year was both a joy and a nightmare. So many great things happened that year, but I also had no idea how to be a civilian, which led to some serious emotional ups and downs as I navigated this brave new world in which I was no longer wearing an Army uniform. One of my anchors that year was RiffTrax, it provided a strong sense of continuity between my previous life and this new one, that everything that had happened before meant something, but also that it was okay to let go of it and embrace the new. Ultimately, that's what I feel RiffTrax represents. We all loved MST3K, but it's the past. RiffTrax is the present and the future. While it's okay to honor and celebrate the past, we must always remember that we live in and for the present, and that our future can be whatever we want it to be, all we have to do is make it happen.


When I ended up dropping out of Pharmacy school to pursue a career in graphic design, RiffTrax served as a muse for much of my art. In fact, in the last five years, I have produced more RiffTrax related art than anything else. My last two books, which are essentially my doctorate thesis of everything that I've learned and grown into these past five years, would not be possible without the existence of RiffTrax. So it has fundamentally shaped my ever-evolving worldview and self-image. It informs everything that I do and everything that I strive to become in my life. RiffTrax has made me a better artist and a better person, and amazingly, it's somebody I like being quite a lot. I can't imagine what my life would be like right now without it.

And it has also introduced me to a great number of people I would have never met without it. A lot of really awesome people who provide a lot of new and unique takes on not only the product, but on life itself and I am very happy that I know all of them. You all know who you are and I love you.

So, to Mike, Kevin, Bill, Conor, Sean, Matthew, Ian, Cole, Janet, Bridget, Mary Jo, Erik, Jason, Jeff and everybody else behind the scenes, I want you to know that your work IS having a profound impact on at least one person on this planet, and I am so very happy to be that person and that you keep providing me with something that brings me quite a bit of happiness.

Thank you and I hope you never, ever stop.

Email ThisBlogThis!Share to TwitterShare to FacebookShare to Pinterest
Labels: RiffTrax

Great tribute. I don't often run into fellow riffheads but when I do there is often a great story, some loss in their life rifftrax helped to soothe, some wound they helped heal, or the flipside, some friendship or relationship a common love of the show brought about.

Your story is great. I think rifftrax serves as something of a "psychic anchor" for a lot of us.